As part of the updates to the Minneapolis Comprehensive Plan that came out of the Minneapolis 2040 effort, built-form overlay maps were produced which permitted higher levels of density near transit, most particularly near high-frequency transit and goods and services corridors. The east sides of the 6xx and 7xx blocks of Van Buren Street NE were designated Corridor 6 built-form districts. Although there has been some suggestion that this was a mistake or that planners did not consider all relevant information, Kimberly Holien, Planning Manager,  indicates that this designation was not mistaken and very much intentional. These blocks are located a half block from Central Avenue NE, which is both a high-frequency transit corridor and a goods and services corridor. The designation has remained in place since then. Recently, two multifamily developments were proposed and received approval under that built-form guidance on the 6xx block of Van Buren. Nearby property owners have since submitted this amendment to reclassify their block from Corridor 6 to Interior 3, excepting the two parcels with already-approved projects. 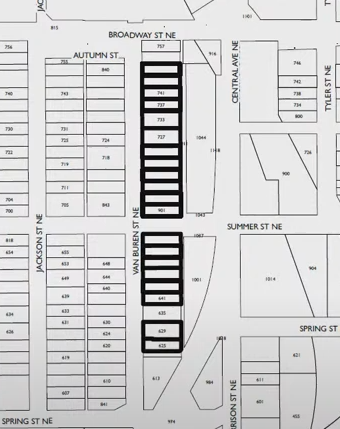 This proposed amendment was considered and recommended by staff to the Planning Commission because of some unique circumstances of the site. But as we’ll show, those circumstances are less unique than they first appear.

At the Planning Commission, the amendment was considered for nearly an hour and a half, with half of that being debate between commissioners themselves. Along with testimony from the property owners supporting the amendment, a number of speakers provided compelling testimony in opposition. The commission considered recommending part of the proposal and rejecting part, and some lamented that they did not have the ability to amend the amendment. Eventually, unable to come to a recommendation, the commission voted to advance it to the BIHZ Committee without any recommendation.

At the BIHZ Committee, the amendment was considered as part of the consent agenda, a strange choice considering how contentious it had been in the Planning Commission. However, it passed 3-2, with one member unable to attend due to illness, sending it to the full City Council on January 12th for review.

It’s important to recognize the broader effect when some privileged groups are allowed special escape clauses from land-use policies; it amplifies impacts on historically redlined neighborhoods and undermines the public perception of fairness. This amendment sets a dangerous precedent, that organized property owners can propose amendments to elements of the Comprehensive Plan they don’t like and expect success. According to city staff member Jim Voll during his presentation to the Planning Committee, staff does consider past actions when evaluating new amendments and approving this would make similar amendments more likely to be recommended. Reading between the lines, this amendment will lead to a lot more relitigation of the Comprehensive Plan.

Furthermore, we believe the city staff recommendation is based on questionable findings, all of which we will discuss below.

Finding #1: The extent to which the proposed change would be consistent with the comprehensive plan goals and associated policies.

Staff recommends approval based on a finding that properties a half block away from a METRO line are not Corridor 6 elsewhere in the city. This is sometimes the case, but not always so. In fact, just north of Broadway, the entire industrial area, stretching many blocks away from Central, is listed as Corridor 6. The proposed amendment would make these blocks the only corner of Central and Broadway to be zoned something other than Corridor 6. This proposed amendment would create an inconsistency where there is currently none.

Along Central Avenue NE, no parcels south of Lowry Avenue NE that are similarly a half-block away from the corridor are Interior 3, as the amended guidance would be, save for several shallower-than-normal parcels located behind the Second Precinct police station at 19th Avenue NE, which could have received different treatment due to their proximity to that station.

Finding #2: Evidence demonstrating the reason(s) that the plan should be changed, including but not limited to whether new information has become available since the comprehensive plan was adopted that supports reexamination of the plan, or that existing or proposed development offer new opportunities or constraints that were not previously considered.

Nothing has changed physically since the plan was adopted. What has changed is that two projects were proposed and approved for the block, and this is what sparked neighbors to petition. Staff recommends approval because the elevated intersection at Broadway and Central was not considered during the 2040 planning process. But there is no evidence presented to that effect.

Moreover, the impact of the viaduct only applies to the properties north of Summer St. It does not apply to half of the proposed amendment, which has no supportive finding here.

Finding #3: The relationship of the proposed amendment to the supply and demand for particular land uses within the city and the immediate vicinity of the site.

Staff recommends approval because Interior 3 would still represent an increase in density for these properties based on what exists today. But it also represents a decrease in density based on what is allowed today, and we have evidence from the two proposed developments for this area that there is demand to live in this area exceeding what Interior 3 would allow, since neither would have been allowable within an Interior 3 overlay district.

Finding #4: A demonstration that the proposed amendment has merit beyond the interests of the applicant.

Staff recommends approval for the same reasons as #3, that the amended district overlay would permit additional density above what is present today. This is rhetorical sleight of hand, as the existing built-form guidance would as well, moreso in fact. It is not in the city’s interest to reduce the allowed density of parcels within a short walk of a high-frequency transit stop and future METRO F line stop.

Finding #5:  The possible impacts of the amendment on all specific elements of the comprehensive plan as may be applicable, including but not limited to [a number of impacts]

The staff repeats the argument here that the increased density allowed by the Interior 3 overlay over what currently exists supports the amendment, even though the current overlay permits even more density, and again notes that the unique circumstances of the area may not have been considered in the Corridor 6 designation (even though there is evidence to the contrary).

None of the findings in the staff recommendation support the city staff’s recommendation wholly. There is some argument for one or two of them to support the amendment for half of the area under consideration, but for the other half there is no support at all. In other words, a reasonable argument for the amendment could be made as it applies to the 7xx block of Van Buren Street NE, but not in relation to the 6xx block.

Staff recommends approval because they believe the circumstances of these parcels (which boil down to the half-block green separation from Central and the viaduct) are unique enough that approval of this item will not undermine the principles of the Comprehensive Plan. With respect for staff, we’re not convinced. At minimum, this item would create a precedent that could lead to similar requests at all other corners of the Central and Broadway intersection. At its worst, it would spark a litany of similar amendments from neighborhoods across the city.