The Neighbors for More Neighbors “What’s in Your Complete Neighborhood?” survey has been open since late October. We have received over 200 submissions from a variety of respondents. Let’s look at the trends in what people want and why they want it.

Though the survey doesn’t collect demographics beyond whether people live or work in Minneapolis, the comments show respondents are a diverse group of people. A small share of people referenced their neighborhoods when they described their ideal spaces. A cluster of people referenced West Broadway and Plymouth in North Minneapolis after the survey was shared to a neighborhood email group.

“I am most interested to see viable coffee shops and cafes in my neighborhood…To access these things you need a car and the nearest places are in the north loop or Bryn Mawr. It would be amazing to have shops like this on West Broadway”

There are also comments about Stevens Square, Powderhorn, and Uptown. Northeast, St. Anthony, and Como were also represented. Most often, their comments were requesting more uses in their neighborhoods.

No matter how you look at the responses, the comments and question graphs show a consistent and clear message: People want more uses in more places. Some particularly popular uses are coffee shops, grocery stores, restaurants, hardware stores, and green spaces. Of those, only green spaces are currently allowed in areas Minneapolis labels as “Urban Neighborhoods.”

Some uses were particularly popular. For the below uses, 98, 96, and 91% of respondents answered that they would want these uses within a five minute walk of their home:

Many people specifically requested housing diversity. One theme was a need for affordable housing and integration of many types of housing:

“I want to see more multifamily housing (affordable and market rate) everywhere, not just along noisy commercial corridors. I want more neighbors living on my block. I would love to be able to walk to most of my destinations. We need more housing density in every neighborhood to make that possible.”

“Would like to see more income diverse housing options…not just low income housing…market-rate housing options at a variety of price points will help bring more people with disposable income to this part of town….folks who have money to spend at cafes and restaurants pictured above.”

By far and away, the most common reason given for people’s responses was a desire to be less reliant on cars. Transit accessibility was one of the most common components of respondents’ complete neighborhoods. Many people wanted to reduce, if not eliminate their car usage. A significant number complained about having to drive to other areas of the city or even to the suburbs to complete their basic shopping needs.

I really don’t like the “corridor” approach the city seems to have been so focused on for a long time…People live in neighborhoods, and restaurants, retails, and services should be in the neighborhoods. It’s crazy simple.

I am most interested to see viable coffee shops and cafes in my neighborhood. To access these things you need a car and the nearest places are in the north loop or Bryn Mawr. It would be amazing to have shops like this on West Broadway.

Cities have a vital role to play in helping foster community and in reducing emissions. We should not be competing on the same playing field as car-dependent suburbs. Cities should play to their strengths and chart a more just and equal path to vibrant community life through safe, walkable neighborhoods.

I also want to see better bike and pedestrian infrastructure where cars are visitors – limited in number, slow, not prioritized – so that I feel safe and welcomed to visit the businesses without driving to them.

The most unpopular uses were dominated by parking lots. This was an extremely unpopular low-impact use:

People put comments in their responses saying that they didn’t like the images that had too much parking and those with surface parking lots in front of buildings. Commenters wanted efficient uses of space for a thriving city:

Minneapolis has so many unique & wonderful spots, let’s continue to grow into the vibrant city we are! That growth does not happen by building more passenger vehicle lanes or more parking spaces. If we want a more vibrant city, we need more  mixed uses environments, bike lanes, & reliable public transit.

Another reason cited was the benefit that walkability can have on fostering a vibrant culture. Respondents cited experiences traveling to or living in other cities where walkability was associated with greater connection to neighbors and local businesses. They pointed out the benefits both for residents who don’t have cars and those who do have cars but want to reduce carbon emissions or save on gas.

I have lived in several cities throughout the U.S. and I feel that it is important to have both residential and commercial density to support a thriving culture and city.

Whenever I travel it’s to somewhere more dense and walkable than Minneapolis… Every time I come home I’m less and less enthusiastic about calling this city home because it is missing so much about what makes a great city. I’d love to be excited to live here.

I like to be able to walk to a neighborhood market to pick up one or two items. I like the exercise and it cuts down on gas use. Neighborhood stores provide a place to meet up with others, and to share information, creating a sense of community.

One of the most divisive questions focused on the very unique land use along Washington Avenue.

Even here, 58% of people wanted this within easy walking distance of their homes, and only 27% did not. Streets with the intensity of uses (and traffic) of Washington Avenue are few, and they are easy to avoid also if Minneapolis does adopt rules that massively expand the uses allowed in Urban Neighborhoods.

Lastly, many people referenced safety concerns related to having commercial uses only on arterial streets. These concerns ranged – some people may have had concerns about crime, but others were worried about safety and walkability on a street so dominated by cars.

“I want it to be safe to walk around my neighborhood. I live in Stevens Square, so lots of these types of uses are within a 5-minute walk, but it’s dangerous and unpleasant to access them.”

There was one unsurprising exception to people’s interest in more uses in more places. Minneapolis allows noxious industrial uses near some neighborhoods, specifically low-income neighborhoods that tend to be home to Black and Indigenous people, and other people of color and low-income folks. We asked about this example and received the following responses:

It’s clear that the vast majority of people want their neighborhoods to be protected from the air pollution, noise pollution, and other health-threatening harms. In Minneapolis today, seeing where these uses are allowed, we must reconsider how we protect people in every neighborhood no matter who lives there.

The survey shows that people want amenities within walking distance of their homes. They want coffee shops, hardware stores, groceries, and restaurants, and they don’t want to have to get to an arterial street to find them. Less than half of the people who responded live in neighborhoods where they are sure the amenities they want are allowed near their homes. 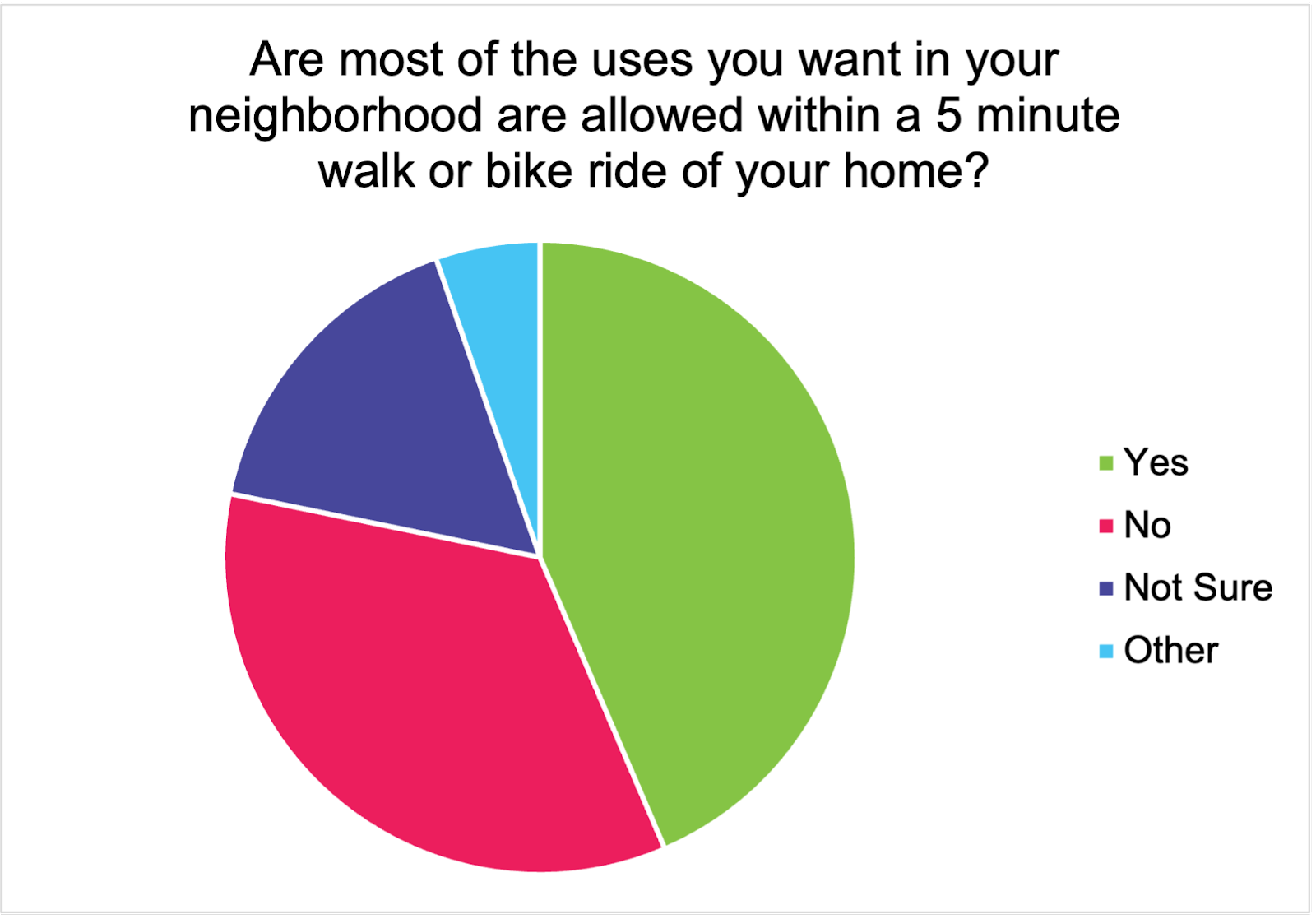 The Minneapolis 2040 plan currently does not allow for the uses that our survey respondents are expressing a desire for in its draft zoning for urban neighborhoods. To learn more about how you can advocate for Minneapolis to allow these uses in your neighborhood, see our action steps outlined below.

What can you do to support complete neighborhoods in Minneapolis?